We’re Not Done Yet 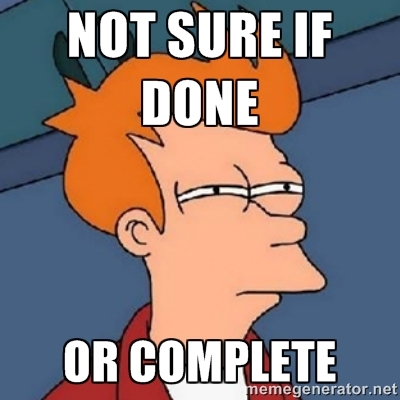 After some feedback from the Done Fallacy post, I feel I need to explore done-ness a bit more.

How we work and talk make up some very interesting distinctions. For example, let’s think about what the word “done” really means. It sounds simple, but the meaning changes over time.

Let’s take a story, for starters.

When we start working on a story, we use “done” as an expectation matching tool. We define done-ness as an acceptance criteria in order to have mutual understanding of what we get in the end.

When we reach a discussion about the story, we’ve already constrained by time and complexity. The story was already cut down to fit in a sprint, or short enough to reduce risk. At this point, there’s a sort-of-defined picture of what the packaged story will include when it’s finished.

Now, what happens as we move forward in time? Things change, we learn as we work. When the sprint is over we can check the outcome.

This is where it gets tricky. Some aspects are easy to declare done/not done while others are a bit vague. Here are some examples:

And there are many more examples. The story may be done, but it’s not really complete.

Here’s the catch: It doesn’t matter.

Much like a comparing actual progress to an original plan, this is not valuable. We don’t learn much from comparing the story state now compared to the original done-ness expectation.

What is important, is what we have implemented and tested, andd is it good enough. If it is, great. If more work is required, that’s fine too – now we know better.

“Won’t it drop our velocity?”

Maybe. You can either:

What you’re not going to do is spend 15-30 minutes discussing the level of done-ness. Talking about estimates being wrong is really waste. Just try to be consistent.

So, are we done here?

3 comments on “We’re Not Done Yet”