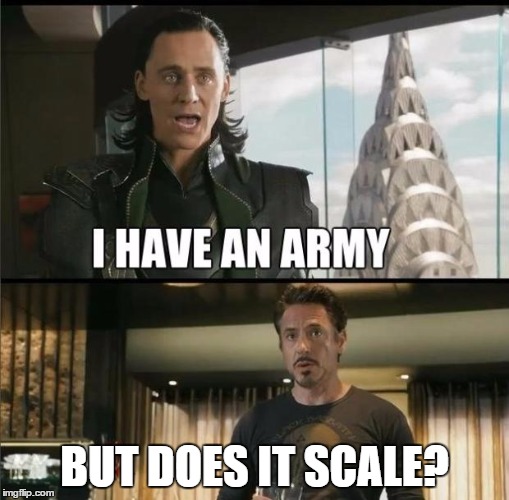 Everyone is talking about scaling agile. Certifications for SAFe, LeSS and others seem to be the order of the day.

But it’s not all about certifications, right? Let’s explore where the need to scale come from, and the problems we have at scaling. No certification needed.

Where is the need to scale comes from? It comes from big companies (with big budgets that can pay for the certificates. But I digress). Big companies have big projects, with multiple teams, with tens and hundreds of people working on them.

In economic terms, that means bigger and bigger costs, and delays in income because of late shipments. Reaction to market shifts are slow, that again hurt companies on the bottom lines.

Companies are ill, and they are looking for a cure.

But is there such magical cure?

As we know, logic has something to do with the way we make decisions. But stories and beliefs have much bigger impact.

Going on the scaling quest, we need to understand that we have a couple of beliefs, not to say superstitions, in our world.

Of course, there are a couple problems with those beliefs in our reality.

First, there’s the versatile definition of “agile”. Most organizations don’t know how agile looks like when it works (or when it doesn’t, for that matter). What they believe agile is comes come from the media, consultants, and experts. (Yes, including me). There’s enough noise that everybody is doing it, so obviously, it has to work.

Then there’s the processes. It is easy to imagine how to amplify the process. But there is no causation between process and the impact. There’s just the promise of what the new process will bring. The truth is, organization transformation is such a long process, that any “proof” that any process works is anecdotal, and very contextual. It can be copied, you’ll probably end up somewhere else.

Finally, organizations that have adopted scrum (mostly) have done it (mostly) badly. However, people believe that the pilot has succeeded, and they are ready for the next step. Despite of what the definition of what a successful pilot looks like, those pilots are destined to succeed. After all, you usually start the pilot with the best, motivated people.

The problem is that in the real world, if you’re fortunate to successfully implemented a process that helps agility in one team, the complexity of multiple teams will not be eliminated by a “just implementing a process”. And if you’re in the majority, you’re team is not really agile, and the amplification can be really hazardous.

So we know why organizations want to scale, and what leads them to believe the road to success is already paved. That’s the demand part. And of course, there’s a whole bunch of suppliers selling a cure.

Does it mean that scaling is doomed to fail? Not necessarily.